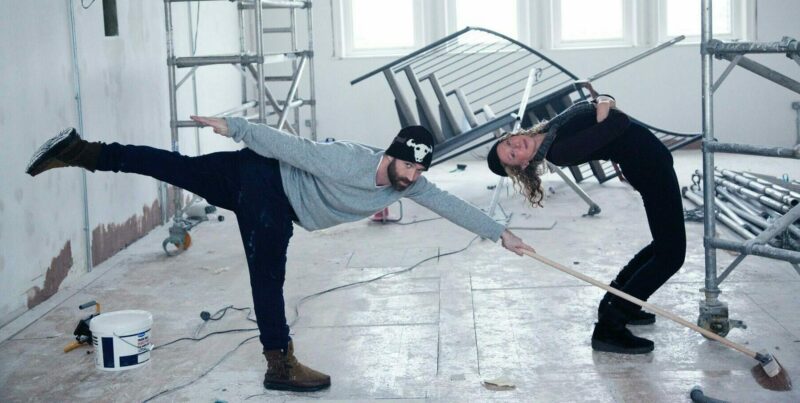 In 1990, after ten years as a Martial Artist, Michele Pernetta’s knees were so damaged she was in constant pain - even kneeling was out of the question. When she trained she had to wear an enormous leg brace. Doctors told her she needed both meniscus and anterior cruciate ligament surgery.

At the time she was living in LA working as a fashion designer, and someone recommended Bikram Yoga.

After a year her knees were 90% back to normal. After four years they were better than before.

In 1994 Michele moved back to the UK with a passion for sharing the fact that surgery wasn’t always necessary in the rehabilitation of injuries. There wasn’t much yoga around then, definitely not any hot yoga. So she started teaching with family and friends in her living room. Soon she was renting studios in North London, dragging the heaters around in the back of her car.

Hot Yoga had hit the UK shores for the first time. No one had heard of it. Lots of people thought she was crazy.

Then injured people from her martial arts and sports background started coming to her classes and were getting relief from injuries that had plagued them for years.

Soon she was juggling a full-time job in fashion with teaching at night.

Between 1994 and 2013 Michele taught and observed over 250,000 students. She practised meditation under her spiritual teacher and studied anatomy and injury modification - training with teachers like Larry Schulz in Ashtanga and Rocket and taking classes with Erich Schiffman, Bikram, Brian Kest, and Steve Walther – all whilst running four studios.

As her own teaching and knowledge expanded, she realised she would need a new type of class in order to progress her students faster, and address everything from poor posture and injuries to physical excellence.

Michele felt students needed more class options and variety of movement, alongside movements that repeated to support progression. She felt what was needed were classes that broke down their postural habits, classes that offered more abdominal, upper body and stabilising poses and deeper hip openers, and classes that provided a variety of moods to turn the forceful person inward, and the relaxed sensitive person outward.

But health and fitness studios seemed to offer only two options - unrelated classes, juggled together at random, or just one pattern of movement repeated endlessly. She wanted to offer integrated classes to allow students to tailor their practice to their own needs while also experiencing variety, and safe, fast progression. She also wanted a method that balanced both body and mind by offering experiences that contacted us in a wide variety of ways, not only physically, but emotionally as well.

So, with no yoga or fitness method around that she felt could deliver a solution to what she felt people wanted and needed, she decided to create one.

In 2008 Michele began work on the new yoga style and class system that would become Fierce Grace.

In designing the yoga system Michele wanted to open yoga to a wider audience - from the injured and unfit to the advanced - and to provide as much variety of movement as possible. She wanted to offer a set of safe foundation poses, with a very wide variety of movements and poses choreographed around this foundation, so the body was safely moved in every way possible, regularly surprised and disrupted.

Michele blended the best of everything she had practised and studied in her 25 years of athletic study. She combined traditional yoga sequencing with modern fitness wisdom, physiotherapy exercises and core-strengthening, and sequenced the multi-style classes for mixed-level students. Michele was happy to potentially p*ss-off the yoga “traditionalists” by adding strength training and physiotherapy stabilising exercises. She was designing for people. Their longevity and their safety. That superseded any desire to adhere to old systems and methods that were invented hundreds of years ago before people sat in chairs all day long on devices.

She also didn’t want a yoga style that separated beginners from advanced. Yoga is the great equaliser, so separating people out isn’t necessary if the teachers are skilled. Instead, she wanted a teaching method and classes that would empower people to understand correct alignment for their body type, allowing them to choose their own level of entry in the poses. To this end, Michele also began writing her own teacher training programme which would develop the skills to be able to deliver these technically excellent, multi-level classes.

For four years Michele, her senior teachers, and a close-knit group of students met secretly twice a week to workshop the one "perfect class" she wanted to create.

They invited different ages, body types and abilities to the sessions. It was a painstaking process that went on for years, with changes made each week. They met “secretly” because Michele ran Bikram studios, and offering anything else was not allowed.

Through a team of teachers and dedicated students, they were able to extensively workshop each class. Having a common set of poses run through all the classes for safety, while addressing the need for every kind of movement through another 250 poses, and delivering a different energy in each class to awaken peoples' different states, was extremely difficult, but an ultimately beautiful and enriching experience.

What Michele was doing was risky and new. She risked her reputation and career to do what she felt was right.

She also risked the future of her studios themselves.

In order to launch Fierce Grace, Michele would not be able to try it in one studio and then expand it out across the other studios if it was successful. She would have to launch it in all four studios at once and gamble her entire life and career on one throw of the dice.

Four studios, 135 classes a week, 50 teachers, and 60,000 students had to be changed from a one-class system to Fierce Grace (at that time a four-class system) overnight. The changing of the four studios purely from a business perspective was daunting. Rebranding and preparing a website, social media accounts, videos, promotional materials, all studio signage, student communications, new schedules, contracts, bank accounts, business registrations, to name a few, plus re-training 50 teachers, took two years of preparation.

The stakes were high. If students didn't like the new classes, within three months the studios with their colossal rents would go bankrupt. Michele risked her entire life on this changeover, knowing that if she failed, she would have lost everything - career, home - and have put her staff and teachers out of work. It was a torturous time, but she felt that if she failed, at least she would have failed doing what she believed in and doing her best.

In November 2013 Fierce Grace was launched to a press storm and enormous support from students and teachers. Six years later Fierce Grace is one of the fastest-growing yoga styles in the world.

None of this would have been possible without our Fierce Grace community, the students who gave this a chance in that first 3 months, and the 45 teachers who joined Michele in putting everything on the line to help others Live Life with Fierce Grace.

“I would like to thank Emma Croft and Mark Oram (pictured above) for their dedication to this process and all the teachers and students who helped me trial these classes. All the teachers who retrained and brought their talent and hard work to FG and our students. And I will forever be grateful to all the students, who had paid for one thing and had it changed to another, who stayed to try the new classes and gave me a chance. Fierce Grace would not exist without all of you.” - Michele Pernetta